Hi everybody! Long time no see! Can you believe Christmas is already just around the corner? And there is definitely a jolly feeling in the air!!!
Anyhow. We have stated our winter theme. It always feel good to move on to something new. Kids get so enthusiastic! We went for a small winter walk around the garden together this week. We talked about the changes we saw in nature: how do the trees look now that is different from autumn or summer? How does the grass look? How does the sky look? Are there any (or many) animals around? Are there flowers? Finally, I told them that winter had arrived.
I read them a book called  The Polar Bear and the Snow Cloud by Jane Cabrera. It is the story about a little polar bear looking for a friend. The snow cloud tries to help by making animal shapes out of snow, but they're not real and they keep melting. 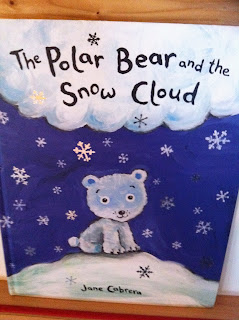 I asked the children to think of things that melt.: ice cream (their favourite answer), ice, snow balls, snow man.. This make me think that there is another cool book you could read the kids and which would introduce the concept of melting to them. It is called The Snow man by Raymond Briggs. I LOVE this simple story. It is a classic and once you sart reading the story, you are bound to feel Christmas is the air. 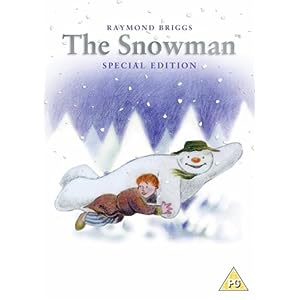 Anyhow. Back to what we did.  After brainstorming for a while, I brought the children to a table where I had prepared 4 containers with ice in it. 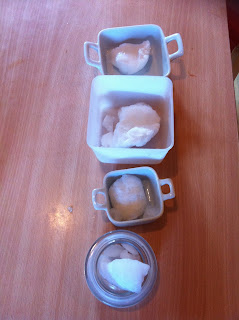 First, I asked them to take some ice I had broken up in pieces beforehand. They held the ice in their hand and observed what happened: "oh, it is freezing, Aude!!", "it's dripping, now, Aude", "that's because it is melting!".. 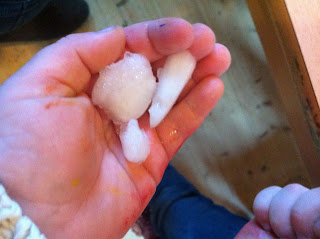 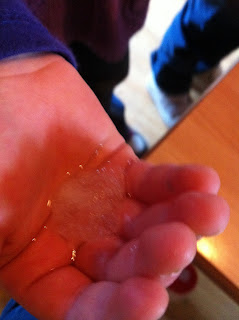 I told them that the ice was melting because their hands were warm and ice doesn't like warm or hot things. If it melts, it turns back into water. Then I asked them if they knew another way to melt the ice. A little boy suggesed to leave it in the sun (he definitely got the idea!!). I agreed. And then I asked "what would you do if the sun was hidden in the sky and it was a cold cloudy day?". One of them said you could blow on it because this is what he does when his hands are cold. (Waaaa, those little brains are working so fast!!). After brainstorming a little bit, I told them that salt can melt ice. 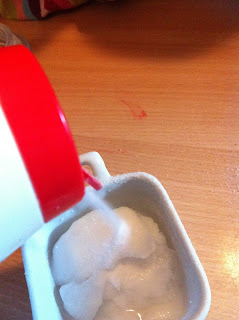 I added some salt to one of our container. Then I told them we were going to do a little experiment and see which tub of ice was going to melt faster over the half an hour. We labelled our tubs: melting with salt, melting on the table, melting on the radiator, melting in the fridge. 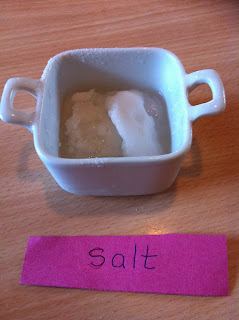 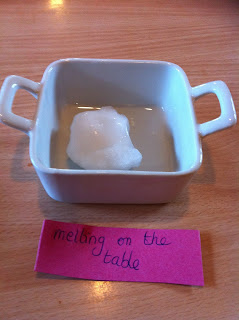 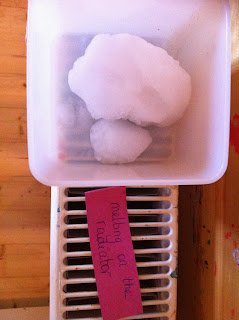 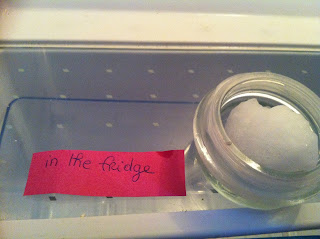 We made predictions (I forgot to take a picture of our little chart- but you get my drift). Most of them predicted that it would melt faster on the radiator (clever bunch!!). None of them mentioned the salt. After half an hour, we went back to check on the ice. Well!!! They couldn't believe that the ice mixed with salt was nearly all melted!!! They got so excited about it!! I reminded tham of last year when it was snowy and icy here. People were buying bags of salt to spray in front of their doorways to melt the ice and make sure they wouldn't slip on their way out. The ice on the radiator came second, the one on the table came third and the one in the fridge came last. I explained again that the hotter it would be, the quicker it would melt.


I have 2 other science experiments to do with the children this month: cryogenics and densiy experiment (not directly linked to winter but I make it Christmassy for fun!). What do you do in your classroom in science at the moment?

To conclude this post, I have added a little video from the Snow Man book. Enjoy it!! I always do:

I took a few photos of what is new in our classroom and of the most popular activities we have at moment in school. Have a look:

I got some bingo dabber in the shop last week (I had been looking for them for some time and got lucky!) 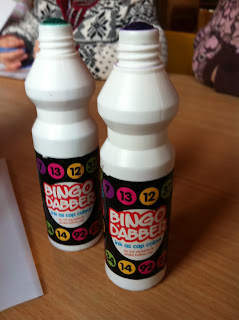 We are still talking about harvest time but we have moved on from pumpkins to mushrooms. So I drew a plain mushroom template for the kid to colour. The I showed them how to use the dabbers to make dots onto the hat of their mushrooms. Oh my God! They were QUEUEING for this activity: 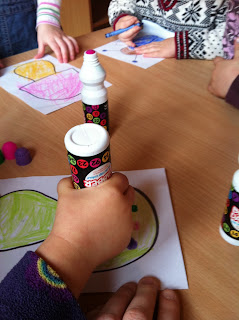 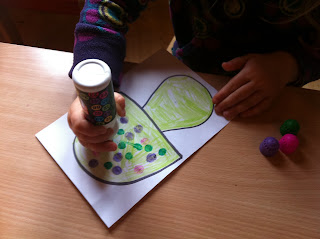 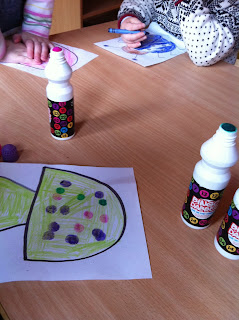 ﻿I laminated the finished product, cut it out, punched a hole on the top and added a string on it. Great little decoration!.

I have had this puncher for a while but I had put it back in the cupboard as the children were not that interested in it anymore. It is now back again on the shelf and the kids love it (for another while!!) 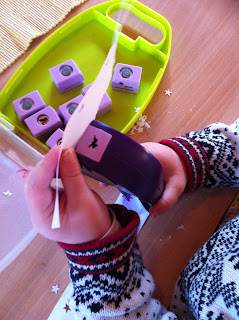 Now, the children are getting such a kick out of this exercise. They spray a bit on water on the mirror and have to rub it off and polish it. What fun! 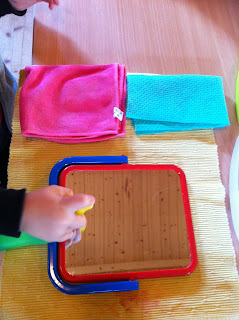 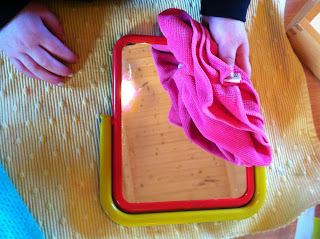 Posted by The Guilletots No comments:

Are you asleep bear?

I am back!! Sorry it took me so long to find the time to write about our little adventures! There is just not enought time in a day for me! Anyway, we are currently completing our Autumn theme and I have introduced the children to the notion of hibernation. At circle time, I explained  them what animals were up to in Autumn time in preparation for the long winter months. First, I read them Time to Sleep by Denise Fleming. It is a wonderful spring-board for class discussions and "acting - out" activities! 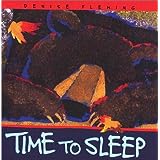 Then I present them to a poster my daughter made for school project. I still look at it with very fond memories of the time we spent together making it and it has proven to be very useful in our classroom. It helps the children to visualise exactly what I am talking about as I read the book to them. 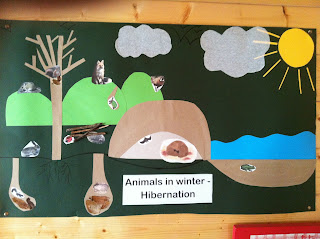 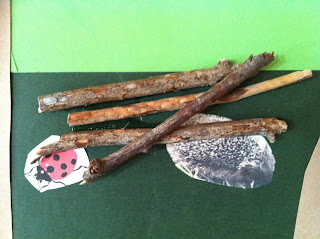 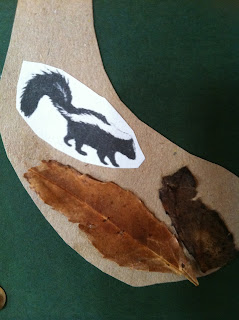 One of the kids favourite game related to the theme is  called "Animal, Animal, who are you?". The children sit in a circle.  One child sits or stands in the center and acts out the movements or makes the sound of an animal.   The other children raise their hands to guess what animal the child is imitating.  The child who guesses correctly then  acts out another animal.  You may want to have the child in the center whisper the name of the animal to you  before acting it out.  Then you can be sure the child has the animal clearly in mind, and you can help the child is necessary. 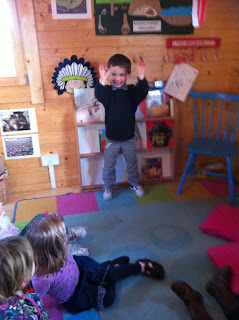 And I love to introduce a variation to our Musical statues game (when the weather doesn't allow it outside, we move the tables around in the classroom and play inside). I call it the Musical Hibernation game. All you need is a CD player and mats. Have a mat for each child. Explain to the children that while the music is playing the animals(them) are dancing. When the music stops it is winter time and it is time to find a spot to sleep. As the children know more about hibernating animals, you can ask them what animal they are when they sleep too.

Another game I have up my sleeve is to bring the kids outside and tell them we are going to pretend there is  a bear hibernating in our garden, and we have to find it to make sure it stays safe (of course, we will have to make sure they grasp the notion that this is only pretending!!!). I was planning to do this game this week but unfortunately, it has been so wet that we haven't been able to go out at all.  The activity is based on the book We are going on a bear hunt. I read the book to the children beforehand (this is one of their favourite book and they know the words nearly by heart!). 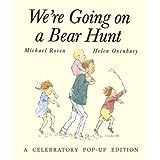 What I am planning to do is first to chant our Bear Hunt song and invite the children to follow me as I go off on the bear hunt. We sing the little song from the book. We act out each line as we go. For example, when we say "we are going on a bear hunt", we all pretend to have binoculars! When we are singing about going throught the thick mud, we exaggerate our movememnts and lift one foot heavily, one after one, pretending to be stuck in the mud.


I have one more activity planned for the HIbernation theme but I need good weather. SO I will kepp you posted as soon as we are lucky!!!! Keep in touch...

Posted by The Guilletots 2 comments:

How big is your pumpkin?

Today, we did a little experiment with the children. The children have been sorting and classifying lots of different types of items over the past few weeks: nuts, leaves, veggies etc... And without even realising it, they have learned a lot!! An extension of these mathematical concepts was to introduce them to measurement. And the best way to do so is to use everyday real objects to teach them. So this morning, I asked them if they could gather around the table to help me figure out which pumpkin was the biggest or the smallest. We used coloured wooden counters as a measuring unit (you can use anything really, blocks, pencils, woden beads etc.., as long as the items used to measure with are all the same size,). 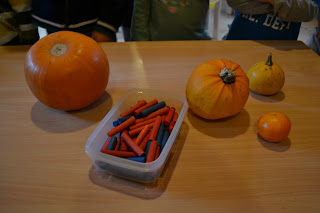 I used the counters by towering them up as tall as each pumpkin.
﻿ 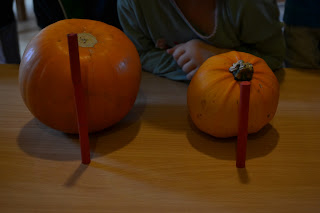 ﻿
Then we counted them. 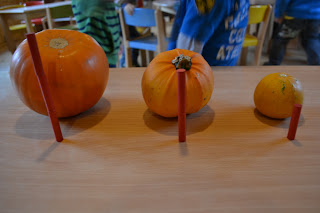 Then I said: "this pumpkin is 3 counters long" and I repeated this process for each pumpkin. 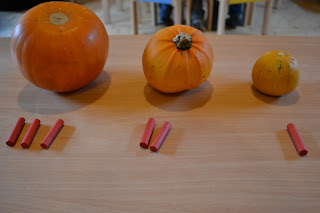 We then placed the pumkin from the tallest to the smallest and laid the counters down for the children to better grasp the notion of bigger/smaller in terms of measuring units. 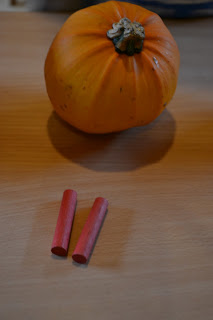 I didn't know if the children would actually find this activity interested. Obviously, the smallest ones lost interest very quickly but my big preschoolers (3.5 to 5) were very intrigued and even made predictions as we went along. So, yes, I think it worked. And I will have to repeat the exercise again.