Language activities in our classroom

A few months ago, I wrote about all the Montessori pre-language activities we have in our classroom in this post right here. As children progress, I then introduce them to more "traditional" Montessori-type language materials. When do I know when they are ready? Well, if they show interest in letters, in writing and in sounds, then I consider they are ready! And I start by introducing them to the sandpaper letters. 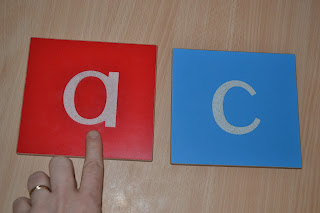 As I discussed in here,  we tend to introduce letters by phonetic sounds rather than by their names. We do not follow the alphabetical order.

We don't have a special set up in our classroom for literacy activities. As part of the Montessori work cycle, I let the children choose the spot of their choice for their work. To be honest, the children have realised (unconsciously) that it is handy to be placed near the language shelf, just in case they have forgotten to bring something with them to the table. Below, you can see our sandpaper letters, our phonic booklets (I will talk about it later on in this post) and my blue container where I store the children's letter and number booklets. These booklets help me to keep record of their progress as they learn sounds with their sandpaper letters (see the post on this record keeping system right here). We also have a "sand" tray for tracing each letter, usually placed on the right hand side of the sandpaper letters on the shelf. A child was using the tray when I took the pictures, so I added a seperate photo below. As you will notice, we are actually not using sand but salt (I find it less gritty and it tends to mark my table a little bit less!!). 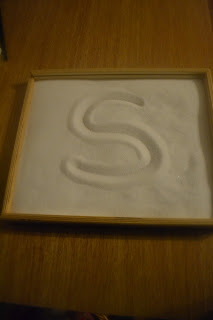 When doing a presentation with a child, I station myself  at the table with the child.  To present a sandpaper letter and its sound, we use the three-period lesson: period 1 (This is letter /a/), period 2 (Show me /a/) and period 3 (what's this sound?). As I trace the letter in its writing direction, I also say the sound of the letter, looking straight at the child. Then I invite the child to trace the letter with his index and middle finger. The child will spontaneoulsy give the sound of the letter, though he doesn't have to.

I recently made some little books for the children to practice their sounds. I printed pictures of words with the initial sounds in question. I cut them out, and made little cards that I then laminated. And finally, I bound them together and voila!! Basically, there is just a picture (or 2) on each page. The picture begins with the corresponding letter sound.  When we read it, we emphasize the beginning sound (i.e.  /mmmmm/ mop). On the front cover of each booklet, you can see the corresponding letter. I have tried to reproduce the effect of the sandpaper letters by gluing some couscous seeds all over the letter. 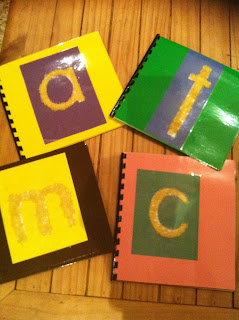 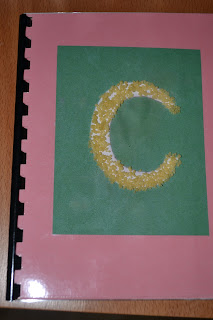 (I am sorry.. for some reason, the above photos wouldn't come out the right way!!)
Once the children have been introduced to a letter, they can refer to the above booklet. For example, if they are learning about /c/, they pick the C booklet, point at each picture on the page, saying the word loud to hear its initial sound. I found it to help the children retain the sound of the letter much easier. The more practice and the more examples you give them, the better. This also can be regarded as a pre-reading exercise as it requires the children to read from left to right. I also ask them to plac their index underneath each photo to prepare them to reading.


When we have finished a full set of 4 letters (for example /a/, /c/, /m/ and /t/), I also like the children to practice further before introducing new letters from a diffrent set. So, following the Montessorian method, I created 2 other exercises.

First, I bought a plastic enveloppe and write the letters of a set on the front. I printed and laminated various pictures of words starting with corresponding sounds and placed them in the enveloppe. The children pick the 4 sandpaper letters they have studied as a set and placed them on the top of the table or the mat. They then take the pictures out, place them in a neatly stack in front of them and picking the 1st card on top. They say the word loud. They then have to place the card under the letter which represent the initial sound of the word. 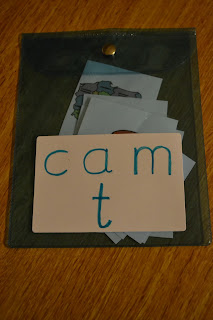 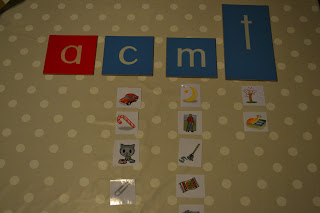 For the second exercise, we proceed the same way but instead of pictures, we use objects. I keep the objects in a box labelled with the letters of the set in question. 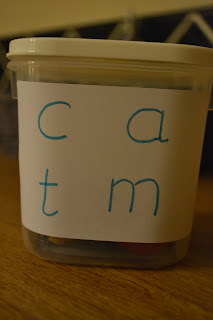 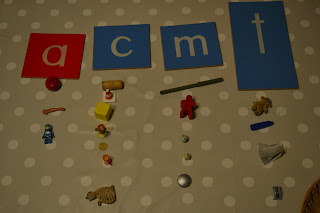 It is important to note that at that stage children do not need to know the name of the letters. They just need to know their phonic sound. Most of them will actually have assimilated both name and sound, but this is not  requirement.

I know.. I said at the beginning of this post that I would talk about more "traditional" Montessori language materials. These activities are not "technically" Montessorian but they are based on the same principles. We are talking about the pink language series (pink object box and  pink picture box with the moveable alphabet, the pink picture and object box with reading cards etc...), the blue and green series etc...

Yet, the booklet and the 2 exercises I have set up are very much adapted to the needs in our classroom. A few children will swiftly move to the "traditional" language activities before the end of the year, though the local primary school teachers have asked us, local Montessori preschool teachers,  not to introduce the children to any letter and sound before their entrance in the primary school system. Why? I am not really sure. I think they fear the children will be given the wrong tools to familiarise themselves to phonics and letters.

However, I went to my son's parent/teacher last Monday and I have to say I was secretly delighted to see what I saw. Stefan is 5 and  started primary school last September. You'll be glad to hear that he is a model student (did she have the right child???). No, seriously, what struck me was her quick presentation of their pre-reading learnings.  She explained to me how they have started blending sounds to make words with the children in her class, after having learned the phonetic sound of each letter. I refrained myself from telling us that this was exactly how Montessorian teacher present pre-literacy exercises to the children to prepare them for reading and writing. I was not ready for a debate and neither did I have the time. But this proved to me that, once again, the Montessori method of education follows the individual needs of the child and his longing for hand-on learning experiences. Montessori has been copied by many educative systems throughout the years and I am proud to be one of its fervent followers. Did you actually know that in the 1980's, in France, the department of education had banned the name of Montessori from its textbooks? My mother who was at the time working as primary school teacher with children from 2 to 5 years old has told me that Montessori was a name not to be pronounced!! Why? She can't remember. What she didn't realise is that the French national curriculum for that age group was actually an adapted copy of every idea and method developed by Montessori!! Two examples: the silence game and the walking on the line. Inspectors had advised her to introduce these activities in her classroom... She only found out that these were actual Montessorian activities when I finished my first training and started reading all the notes she took over her 27 year career. She couldn't believe it!!! Neither did I!!!